Another pretty decent performance. We found out about this one sort of at the last minute and as it happened we were southwest of Madison in Amana IA for the New Horizons Owners Group rally the week before and heading over to Cuyahoga National Park near Cleveland the following week we just left Amana the morning after the rally instead of 2 days later and spent the weekend in Rockville OH about 200 miles east of Amana. From there it was a 70 mile trip each way up to Madison for the concert. We ate dinner at the same Irish Pub we visited a couple of weeks before when we were staying in Madison then walked over to the concert hall.

The program opened with Also Sprach Zarathustra from Strauss. The first 22 measures of this piece are famous as they were used by Stanley Kubrick in the movie 2001: A Space Odyssey. The rest of the piece is a nice tone poem but nowhere near as exciting as the opening is. Connie doesn’t like it much but Neil does. Next up was the premiere of the Martin Concerto for Seven Winds…which was melodic at least in comparison to many contemporary pieces. It didn’t really do anything for either of us though.

After that and intermission it was on to the Saint Saëns…which was pretty magnificent even though the organist flubbed a note towards the end during the series of descending pedal notes right before the climatic fanfare. The organ also didn’t have quite as much low end power as one would have assumed  from looking at the pipes in the organ loft…or maybe it was just voiced that way for this performance. In any event…a decent time was had by all and we headed home.

On the way home about midnight pretty close to our campground for the weekend we witnessed a single car accident…a guy in a pickup under the influence of booze, drugs, or both blew a stop sign…almost hit the car in front of us…and nosedived into a drainage ditch and then up into somebody’s yard. We stopped and called 911 to report it…and the operator was unhappy that we chose not to approach the car initially as who knew what the deal was. We finally decided it was safe enough and checked it out along with the owners of the yard the truck was in. The cops showed up but the guy had booked it by then…so in came the K9 to go and find him. We decided to not hang around and left our name and contact into with the officer in charge at the scene. We never heard back from them…so either they caught him and he was drunk or something. It was a bit of excitement for our evening at least.

Here’s a shot of the organ…you can see from the lot size that we were a little underwhelmed by the organ’s power. 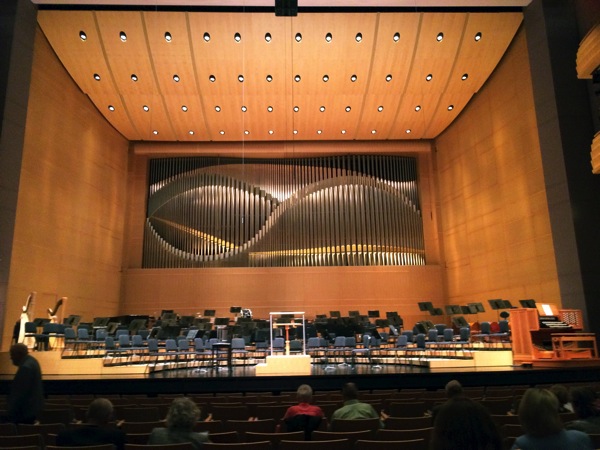 That’s our last performance for this season as far as we know…Connie’s searching for the winter months didn’t turn up anything we will go to except maybe one up in Jacksonville in the late winter.